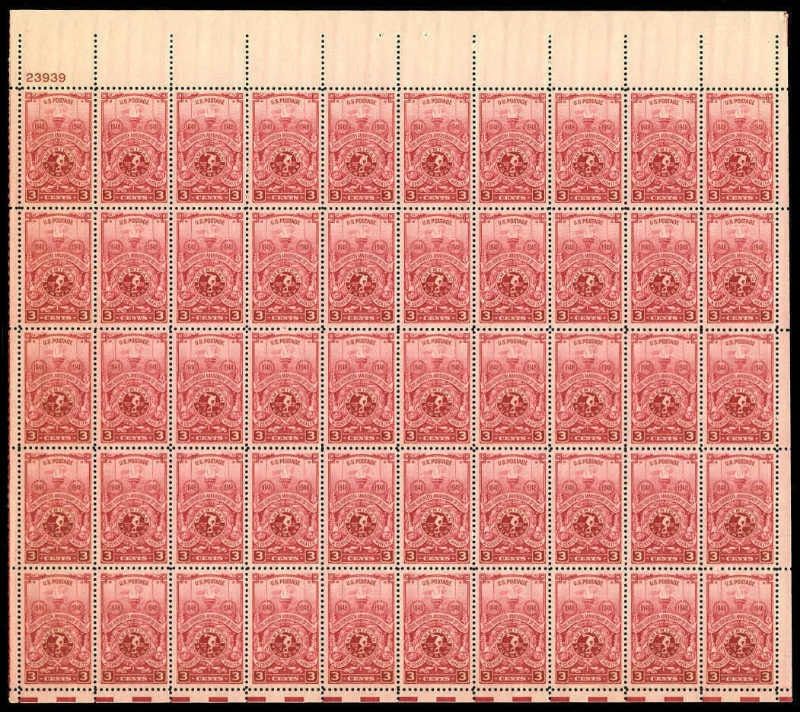 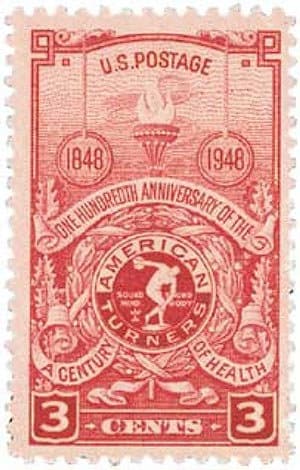 This collectible sheet of fifty 3-cent US postage stamps was issued to commemorate the American Turners Society 100th Anniversary. The American Turners were an organization of German-American gymnasts who promoted physical fitness.

Each stamp is 0.84 by 1.44 inches in dimension, arranged vertically, printed by the rotary process, in red, electric-eye perforated, and issued in sheets of 50 subjects. With a Greek border at the top of the stamp is the inscription “U. S. Postage” in solid Gothic letters. Below the inscription is a torch throwing light on the history of the American Turners. On the left and right sides of the torch are a pair of hanging rings which are used for physical training. Within the rings are the dates “1848” and “1948” in solid Gothic letters. Just below the rings is a ribbon with the words “One Hundredth Anniversary of llie” in solid Gothic letters and below in a circle is shown the American Turners National emblem which reads, “American Turners Sound Mind Sound Body” in dark and white Gothic with a Greek model of an athlete about to throw a Discus. The emblem is embellished with a laurel wreath which stands for honor. To the left and right in the lower part of the stamp are ribbons with the words “A Century of Health.” In the lower corners are shields with the numeral “3” in white Gothic, and between the two shields the word “Cents” in white Roman letters. At the lower sides are oak branches which stand for age.

The stamp was first offered for sale at the Cincinnati, Ohio, post office, on November 20, 1948.