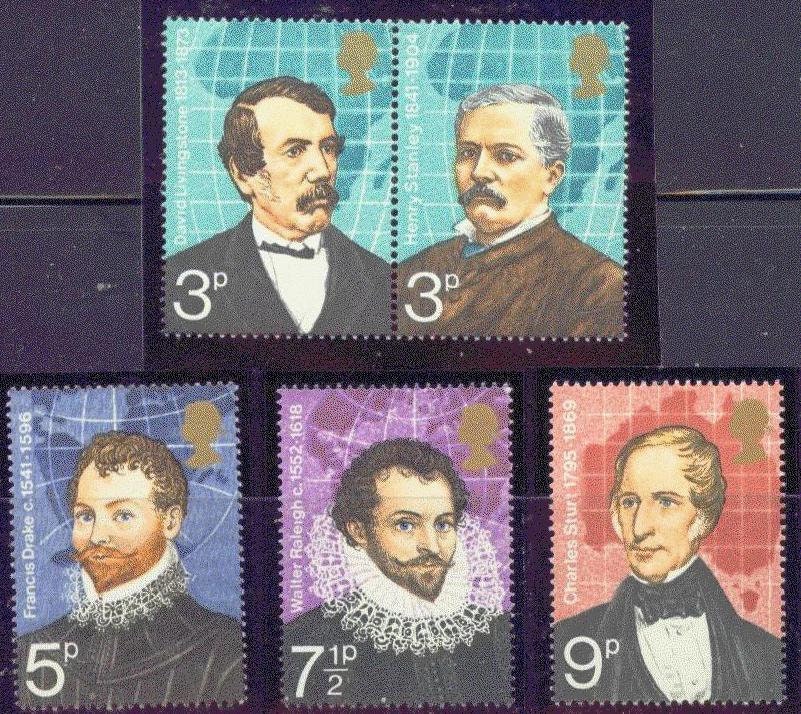 These five stamps were issued on 18 April 1973. They were printed via photogravure on coated, unwatermarked paper by Harrison and Sons with all-over phosphor. The set included two 3p values printed se-tenant.

One of the 3p stamps featured a portrait of Dr. David Livingstone (1813-1873) superimposed on a map of Africa. Livingstone, a Scot, went to Africa in 1840 in the service of the London Missionary Society. Abhorred by the conditions inflicted on the indigenous peoples by the slave trade, he devoted over 30 years of his life to the welfare of these people. Livingstone saw his primary duty ‘to explore and open out the country, teaching as he went but not settling down’. In doing this he discovered Victoria Falls and opened up vast areas of the continent that had been completely unknown.

The other 3p stamp featured a portrait of Sir Henry Morton Stanley (1841-1904), again superimposed on a map of Africa. Stanley, a Welshman born in poverty and bought up in a workhouse, was a much-travelled journalist and discovered the source of the Congo. Following rumors of Livingstone’s death, Stanley was sent by the ‘New York Herald’ to substantiate or refute these reports. It was at Ujiji that Stanley found Livingstone, alive but ailing, in one of history’s most famous encounters. The portraits of both Stanley and Livingstone were taken from prints held by the Royal Geographical Society.

The 5p stamp shows Sir Francis Drake (circa 1541-1596) against a global map. Sir Francis was the first Englishman to circumnavigate the world: the journey took two years and ten months. The portrait is based on two miniatures and an engraving held by the National Portrait Gallery in London. One painting is by an unknown artist, the other by Nicholas Hilliard; the engraving is attributed to Jodocus Hondius.

Sir Walter Raleigh (circa 1552-1618) on the 7½p stamp is shown against a global map. Sir Walter is famous for his voyages to the West Indies and North America and was responsible for giving the name Virginia - after the Virgin Queen - to the eastern seaboard of North America. His portrait is taken from another Nicholas Hilliard miniature in the National Portrait Gallery.

Charles Sturt (1795-1869), called the ‘Father of Australian Exploration’, led expeditions along the previously impenetrable marshes of Macquarie, the Bogan and Castlereagh rivers. He discovered the Darling River, which he named after the Governor of New South Wales and went on to find the links of the Murrumbidgee River with the Lachlam River, and discovered the Murray, opening up over 2,000 miles of water communications. The portrait was taken from the painting by J M Crossland, held in the South Australian Art Gallery in Adelaide. The portrait was set against a map of Australia.