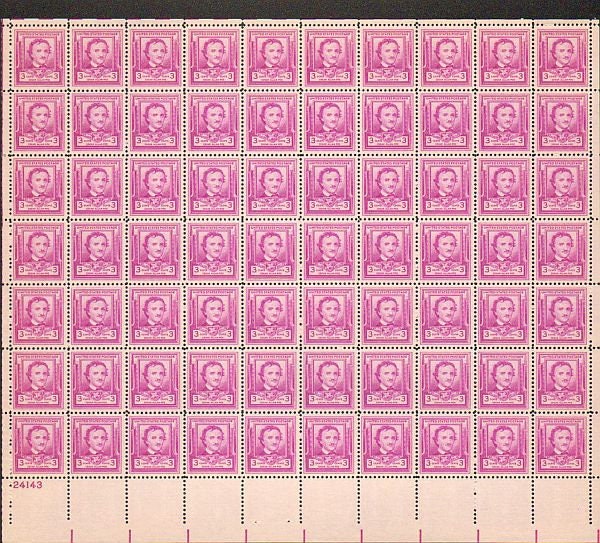 Mint never hinged sheet of seventy 3-cent US postage stamps honoring famed American author and poet Edgar Allan Poe. These stamps can be collected or used as postage; if used as postage, additional stamps would be required to make up the current first class mail rate.

This stamp was issued to mark the one hundredth anniversary of the death of Edgar Allan Poe.

Each stamp is 0.85 by 0.98 inch in dimension, arranged vertically, printed by the rotary process in purple, electric-eye perforated, and issued in sheets of 70 subjects.

The central design of the stamp is a portrait of Edgar Allan Poe enclosed in inner and outer frames of Georgian design, between which at the top is the inscription “United States Postage.” Below the portrait frame is a horizontal tablet containing on a white ground the name Edgar Allan Poe, above which appears the denomination “3” at each end with the word “Cents” between, separated by an ornamental shield-shaped panel in which is depicted in white, on a solid background, a reproduction of the winged horse Pegasus, which forms the symbol of poets. All lettering is in solid Gothic.

This stamp was first placed on sale at Richmond, Virginia, on October 7, 1949.