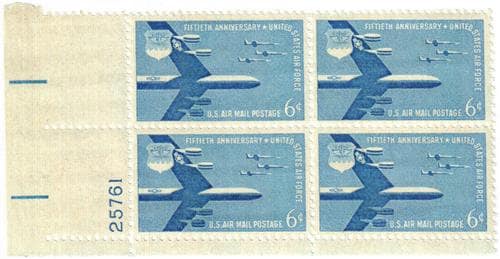 These 6-cent air mail stamps were issued to commemorate the 50th anniversary of the United States Air Force as part of the National Defense System.

Each stamp is 0.84 by 1.44 inches in dimension, arranged horizontally, printed by the rotary process, and electric-eye perforated. The color of the stamp is Air Force blue. The stamp has for its central subject a B-52 Stratofortress in a banking position with three F-104 Starfighters in the background. The Air Force eagle and thunderbolt shield appear in the upper left corner of the stamp superimposed over a portion of the wing of the Stratofortress. The wording “Fiftieth Anniversary United States Air Force” is arranged in one line across the top of the stamp and to the right of the design. The wording “U.S. Air Mail Postage” and the denomination “6c” appear in the lower right portion of the stamp. All lettering is in white-face Gothic.