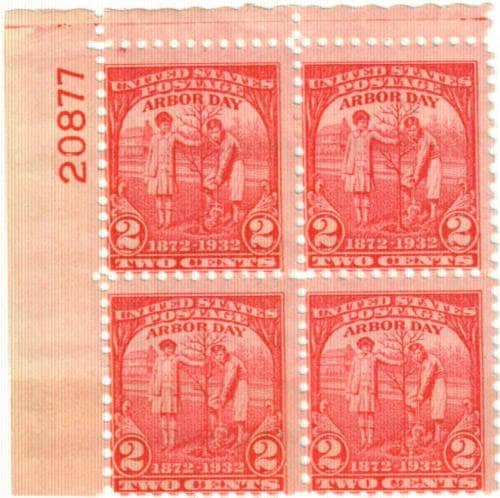 This plate block of four 2-cent US stamps was authorized in commemoration of the sixtieth anniversary of the establishment of Arbor Day, on April 22, 1932, and in honor of the one hundredth anniversary of the birth of J. Sterling Morton, through whose efforts a day was first officially set aside for the planting of trees by the State of Nebraska in 1872.

The design of the stamp is surrounded by a narrow white-line border within which on either side rises a large tree with spreading branches that meet at the top in the form of an arbor. Across the top of the stamp in two curved lines are the words “United States postage” in white Roman. In a curved line inside the arch are the words “Arbor Day” in red Roman. Across the bottom of the stamp in a narrow panel, with solid background and white edges, are the words, “Two cents” in white Roman. Directly above the panel on each side within a circle with white edge and solid back- ground is the large numeral “2.” Acanthus scrolls extend from the tops of the circles over the base of the trees. The central design of the stamp pictures the planting of a tree by a girl and boy, the former holding the tree in position while the earth is filled in by the boy. In the left background is a small house with forest trees extending to the right. In a straight line below the central figures are the dates “1872-1932”, in white Roman. The Arbor Day stamp was first placed on sale in Nebraska City, Nebraska, the former home of J. Sterling Morton, on April 22, 1932.