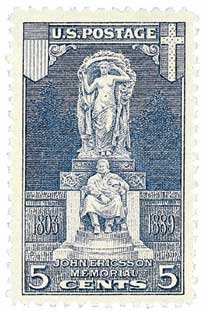 This US postage stamp of 5-cent denomination was issued as a memorial to John Ericsson, builder of the Monitor, and in connection with the unveiling of his statue by the Crown Prince of Sweden at Washington, D.C., on May 29, 1926. The subject of this stamp is a model similar to the John Ericsson memorial statue designed by J. E. Fraser.

The central design of the stamp is the white marble figure of John Ericsson seated in a large chair resting on a stone base. Upon the base appear the words “John Ericsson Memorial” and “Cents” in white Gothic letters with the numeral “5” in both corners. Extending from either side and in the rear of chair on darker stone appear the years of his birth and death, “1803-1889.” On an ornate base, above and to the rear of the figure of Ericsson, is a group of allegorical figures in white marble, of which only the center one, representing “Vision”, is shown. The background for this statue is a dark sky with darkly silhouetted evergreens showing on each side. A narrow white line border surrounds the stamp with a shield of the United States in the upper left corner and a shield of Sweden in the upper right corner. Connecting the two shields is a panel supported on each side by small ornamental brackets and containing the words “U.S. postage” in whiteface Gothic letters.

We often have multiple copies of this item in stock; the image shown is representative of what you will receive. Please be aware that centering varies with older stamp issues.

When a person purchases printable art from Sonora Stamp Shop, what exactly does that person receive?

These listings are for digital files; usually a set of digital files in different sizes. (Read the item description to see exactly what sizes are offered.) No physical item will be sent. You can print the artwork at home (quality paper recommended), or have it printed by using a local print shop, photo center, or online service.

What else should I know about buying printable art?

1) Your purchase is intended for personal use only.
2) Please keep in mind that colors can vary from one monitor to another, so the colors you’re seeing online aren’t always exact.
3) The refund option is not available for instant download products. If you run into any issues please contact us and we will work to resolve any issue you may encounter. We want you to be happy with your purchase!