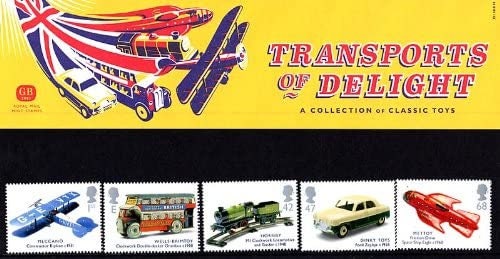 This pack contains a set of five mint stamps, which were produced to celebrate classic model vehicles and 50 years since the first Toy Fair in Britain. The special stamps show British toys from the 1930's to the 1960's and the role transport played in their evolution. One man, Frank Hornby, was responsible for 3 of the most popular makes, the Meccano range of construction kits, the famous Hornby tin trains and his die-cast Dinky Toys. Wells-Brimtoy and Mettoy toys feature on 2 of the other stamps in this issue.

Issued by the Royal Mail on 18th September 2003.
Ideal as a gift or keepsake, making a wonderful addition to any collection.