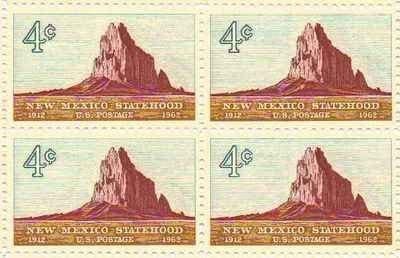 These 4-cent US postage stamps were first offered for sale on January 6, 1962, at a Post Office in Santa Fe, New Mexico. The issue commemorates the 50th anniversary of New Mexico’s admission into statehood. As a result of the Treaty of Guadalupe Hidalgo, which signaled the end of the Mexican-American War, the United States received portions of New Mexico. The territory obtained statehood in 1912. The stamp depicts an image of Shiprock, a geological formation in northwestern New Mexico in the Navajo Nation.