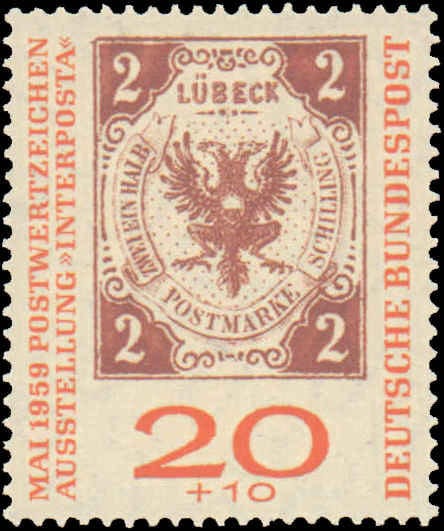 There are three major reasons why the official (and sometimes unofficial) language of a country can be important to a stamp collector. That isn’t to say that one has to be fluent in a language to collect a certain country’s stamps – I recall a late British expert on Latin American stamps who knew no Spanish – but, in general, it helps. Besides, learning even a little of a new language is good for one’s cognitive skills, so there’s certainly no downside in developing some familiarity with the language of one’s chosen area of stamp collecting.

In this blog post, we’ll define the Germanosphere (it really is a word, I’ve not made it up), where German is the official language, as well as some other Germanophone (Germanophonic?) regions. But first, let’s get to those three reasons I mentioned.

This is obvious, isn’t it? Current German stamps bear the name “Deutschland” which is, of course, “Germany.” Previous stamps read “Deutsche Bundespost” or other identifiers. “Briefmarken” means stamp, or stamps, or postage stamps.  But a lot of stamps, especially, newer ones, have a good deal of text on them, and it would be nice to know what that text actually means.

Language becomes even more important when considering covers and other postal history items. In addition to the stamps themselves, there are usually postal markings and addresses. Sometimes there are forwarding notes. Sometimes there’s an enclosure, which would be interesting to read.

Reason Two – You Can Use All the Michel Catalogues

You might want to stop me here to tell me that Michel is now issuing some catalogues in English, but not all of the Michel catalogues are offered in English, and some of them can be very useful to collectors of German stamps, like the Deutschland-Spezial catalogues.

So, What Countries Make Up the Germanosphere?

If you only collected the stamps of the six countries listed above, you’d be busy enough to keep yourself occupied for a few lifetimes. (You could, of course, restrict yourself to the stamps of those countries during a certain time period.) German is also a minority language in some countries like the Czech Republic, but to keep this blog’s length manageable I’m going to stop right here and return to my main point, which is: if you collect German stamps, there’s no harm in knowing some German.

Previous Post What Countries Do French Postage Stamp Collectors Collect?
Next Post How To Get Free Shipping
0 items in your cart