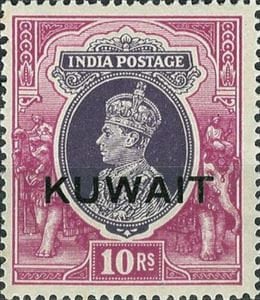 For stamp collectors collecting British Empire postage stamps, it’s necessary to know exactly what countries are (or were) in the British Empire during the era of postage stamps, which began in 1840 and is, happily, still going on today. Previous blog posts have listed countries for British Europe, British North America, British Asia, and British Africa. That only leaves two areas to go – British Middle East and British Oceania – and today we’ll consider the British Middle East.

This is an exciting area to collect, and one could easily (and enjoyably) devote a lifetime to collecting stamps of the British Middle East without ever worrying about finding items to add to one's collection.

Please bear in mind that some of these countries no longer exist as such, and that the ones that do still exist have declared their independence and, following independence, were no longer a part of the British Empire.